My entry for the E1M1 Game Jam.  Currently just getting started.  I am hand drawing all the game art with ball point pen on graph paper.

Story:
You must save your daughter from the clutches of the evil Necromancer and his minions.

Gameplay:
It is a fairly standard FPS game, but I tried to make things somewhat interesting by rewarding exploration.  If you pay attention to clues, you may find some secrets that will help make your job easier.  On the other hand, if you rush through and neglect exploration, you may not acquire powerful enough weapons to defeat the Necromancer.

So I originally commented on Catacombs about a year ago to ask if I could use it as an example in a tutorial guide I was creating for the Raycasting Game Maker. It didn't end up becoming a video series as originally intended, but it is now a 118 page PDF guide book and includes every last detail and trick I could think of.

Catacombs of the Necromancer makes several key appearances as examples of different features and tricks, so I wanted to thank you again for allowing its inclusion.

Here is a link to the finished guide: https://filmgamerj.itch.io/guide-to-raycasting-game-maker

Oh awesome!  Is this something I can share with the public, or just for me?

I will be reading through this and I will let you know if I have any feedback for you.

This is a fully free resource I've developed for the community. So you are welcome to share the link anywhere and everywhere you like. I'll be looking for other places to upload it as well so it gets the widest coverage.

Always an interesting style for a retro FPS. See also....

Hey Schmidt.
So I think I mentioned before that I'm putting together a tutorial for all the ins and outs of how to use the "Raycasting Game Maker," and I wanted to ask if I could use your game as a visual example?

I'm working on both a written tutorial and a video version.

Please go ahead, I would be honored if you did.  Thanks for asking!

This takes the limitations of RGM and shows just how much you can get out of them. If I'm guessing correctly, is each level it's own game file? And the intro screen text is the end screen from the previous level?

You've also helped me see how sprite destruction can actually be used to make barriers. I had no idea that's how you could utilize them.

Thank you, you are fairly spot on.  The second and third levels are actually part of the same game file.

So I just noticed something really fascinating about your game that's got me thinking.

Does that mean that every setting on the Game Settings dialogue box can change between game paks? Could the full screen become a windowed screen? Could player controls get swapped between levels?

That sounds correct though I've never tried those things.

The annoying thing is that I could not bring something like weapons across from one game pack to another.  You do have the option to start with the first weapon or not.  But I wanted to have a small adventure in the town where you could get an extra weapon in the town.  I had to move it to the forest.  It's okay, I think it worked out ...

So what do you mean the weapons couldn't carry over?
Wouldn't you just re-import the same bitmaps to the next levels and the 2nd game pak?

I loved the hand drawn pencil work you have done here, it looks great!

I dig the artstyle and level design in this one. Using sprites to tell a story is quite a neat idea too. The gameplay is pretty good, I had enjoyed playing thorugh the whole thing. Great work!

You madlad, not only did you draw the graphics on paper, you used graph paper :D
Of the three entries in the E1M1 game jam I've played so far this one was by far the best in terms of level design, balancing (enemies were neither too hard or too easy) but it also seems to be the only one not struggling against the limitations of the engine at every chance it gets but actually embraces it's features.

I honestly had a blast working on this.  Thanks for playing!

And I though Ethan Winters from RE was a father of the year!
This character, this story, the entire idea of unique texturing and retro gameplay, just can't describe enough how amazing this game is. As always, big fan of yours, I was planning on reviewing your project and after the gameplay, it just delivered! Fantastic truly. And, what's most fascinating about this is your previous projects have been so different and this one, with it's looks and design is very powerful. Good Job! Keep doing more!

Edit: SPOILER FOR THE GAME

It's interesting how the game starts and when the character goes around the area, meeting people who demotivate him and, honestly, I have never seen that type of behavior in these type of games. And, this is a major compliment of how invested you get in the game, from the start and rather then having a hero, who is all the best, you are set with the character, who is told by other's that he is making a mistake. That's great.

Thank you for that.  This was honestly one of the best times I've had developing a game.  The engine is so small and limited that I did not set my expectations high at all.  But as I had ideas, I just tried to see what worked and didn't.  I am glad you enjoyed it :)

Wonderful!  I have to update that help file :)

There is a new level in the game now too... 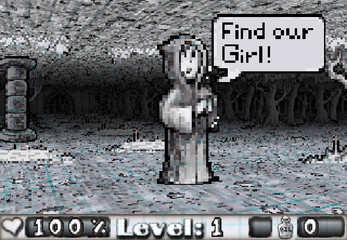 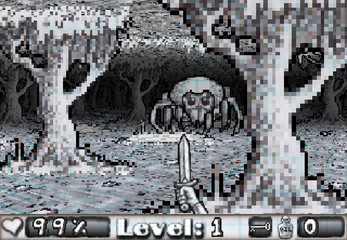 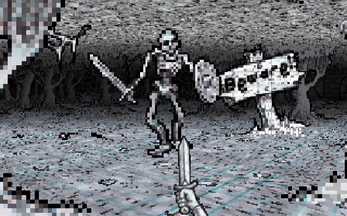 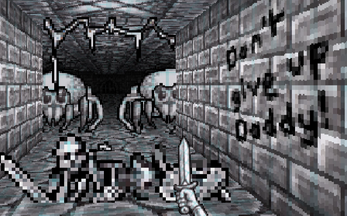 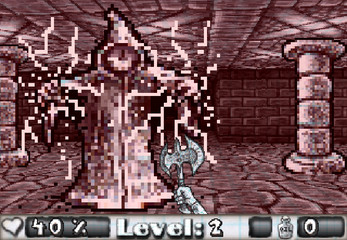