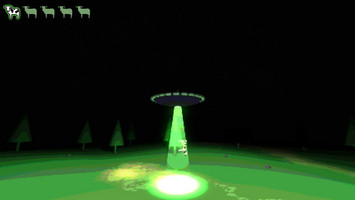 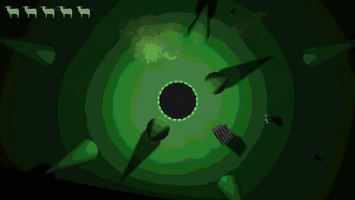 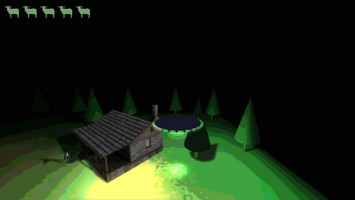 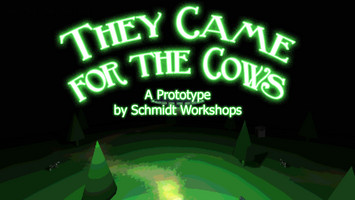 New Levels:
Now each time you start the game, and each time you complete a level, the pasture will be "shuffled" such that cows, trees and rocks will change positions.  Also, each level will get progressively more challenging, in that a new farmer will be added (up to three).

Luring farmers away from the cows, or abducting them directly, will help you achieve your objective.

Cow Icons:
Each level has five cows that you must abduct in order to finish.  There are five cow icons that let you know your progress.

Next Steps:
Lose State and Other Ideas:
The game currently has no lose state.  Farmer's shells will prevent you from picking up cows or turning invisible for a few seconds, but will otherwise leave your ship unharmed.  I am thinking about having some kind of damage meter, where your ship can eventually stop functioning.  This would allow for a lose state, where the level would have to be restarted.  I was also thinking that the rock could perhaps be used to repair your ship, giving the rocks some gameplay value.

With a few more elements in this level, I will begin thinking about another level idea.  That way, once the first three levels on the farm have been completed, the player could progress to a new location.  Perhaps a rural town, or something like that.  Once three such locations are added, with a few iterations of each one, we will have a respectable game.

Mothership:
One more idea would be to add a mothership, where the player can go between assignments.  This would allow players to repair/upgrade their ship after turning in their cows.  It would also allow for some additional things like weapons upgrades, and other ways to protect the ship against, or distract, farmers.  My thoughts are that any weapons will be non-lethal, maybe some kind of stun ray, or

Get They Came for the Cows

They Came for the Cows